Or, “how not to make a fundamental attribution error on yourself;” or, “how to do that thing that you keep being frustrated at yourself for not doing;” or, “finding and solving trivial but leveraged inconveniences.”

One of the key insights of social psychology is that our reactions to events are hugely dependent on the fine details of the situation in question, and often pretty much independent of personality. For instance, suppose you have a bunch of people to playing the Prisoner’s Dilemma with each other, and you want to figure out who will defect. Most people’s theory of mind here says something like, “people defect because they’re self-interested or grumpy or vindictive.” So you might ask a player’s friends how cooperative they were, and use that to guess who will cooperate.

Unfortunately, this approach is totally useless. People are equally likely to cooperate whether or not their friends think they’re cooperative. In the Prisoners’ Dilemma, your friends’ assessment of your personality does not correlate at all with your behavior.

Fortunately, there’s something else which is a pretty good predictor! In particular, it matters a lot whether the instructions of the game called it the “Community Game” or the “Wall Street Game.”1 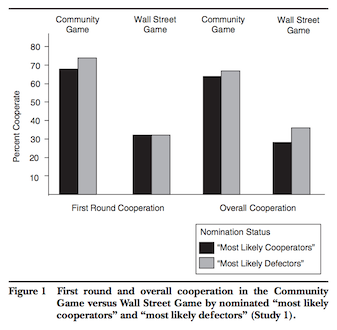 Yep, a single phrase of the instructions, repeated twice, causes cooperation rates to double. If you ever like to think of yourself as some kind of agent whose decisions are controlled by a rational ego (instead of some random words you heard once upon a time), you might find that a bit worrying.

On the other hand, if you like to think of yourself as the kind of person who prefers to have true beliefs, you might be excited because your beliefs just got truer! You probably sometimes fail to impose egoistic control on your own decisions, and if you understand your brain purely as a consciously-controlled ego then you will be really confused when this happens, and spit out solutions like “try harder next time” or “have more willpower” or “don’t be dumb” or “don’t get distracted” or something.

These are fake solutions. They would totally solve your problem, except that they’re not really actions you can take.

So you should change your model. There are examples everywhere of seemingly trivial changes to circumstances that disproportionately change your behavior. Another example in the literature is that students advised to get tetanus inoculations were far more likely to do so if they were given a map to the university health center and times of operation, which the majority of the students already knew.2 (Of course, intent to get an inoculation had almost no predictive power unless students were given a map.)

The psychology term for such things is a “channel factor,” and it’s probably the most useful psychology concept I’ve learned this semester. Since acquiring it, I’ve noticed it cropping up a lot. For instance:

The common thread is that the inconvenience is so trivial that I didn’t even notice it until I was specifically on the lookout for channel factors. My usual model of myself is too sane to do things like not floss because I didn’t have the thing that made my fingers slightly more comfortable while I do it. Whoops.

Anyway, this results in a heuristic of, when I am frustrated by the fact that I ’end up’ not doing something I ‘want’ to do, looking for channel factors. So far, it’s been pretty successful at uncovering small modifications with large effects:

Have you discovered any channel factors of your own? What am I missing?

Be less scared of overconfidence

most important things are outlier-driven • draw lots of samples • filter for maybe-amazing, not probably-good • learn where your bar should be • expect to fail a lot

Networking can be actually useful

I used to think that “networking” was completely bogus, i.e., basically people just trying to use other people for their own ends by being friendly and pleasant at them. However, there’s an actually useful version of networking which is more than a strange ritual practiced by MBAs.