TL;DR: The limited public evidence suggests Boston has likely failed at containing the coronavirus. State officials should start communicating more transparently about the current status of the outbreak, and the city should cancel large events, in particular the St. Patrick’s Day parade. If you agree, call your elected officials to ask for better communication and aggressive mitigation measures.

(Epistemic status: I’m not an epidemiologist, I just like extrapolating exponential growth.)

Today, the Mass. Department of Public Health disclosed an additional fifteen presumptive positive cases of COVID-19, all of which had a “direct connection to the Biogen employee conference in late February,” bringing the total number of Massachusetts cases “associated with the Biogen conference” to 23. 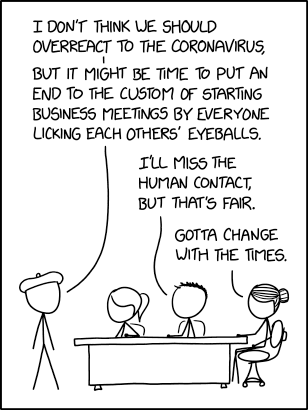 By default, this seems really worrying: multiple rounds of transmission, in a space where lots and lots of people come into contact, mediated by people who are likely underpaid enough that they have a strong incentive to show up for work while symptomatic. Plus testing throughput that’s way, way too low to screen everyone the virus could have gotten to by now.

Of course, it’s possible that the DPH/city administration/etc. has more information that would make this seem less worrying to them. Maybe Marriott Long Wharf staff were quarantined immediately after the conference. Maybe testing throughput has gone up a lot. Maybe investigators are diligently tracking down and testing everyone who worked at the Marriott (not just people who already have symptoms) and everyone they interacted with.

But if there’s a hidden reason to be reassured, then DPH officials should be reporting it. So far, they’ve been extremely vague about the status of the outbreak—as you can tell if I’m reduced to citing Reddit for information. How many Marriott Long Wharf staff are confirmed positive? How many others are experiencing symptoms? How many other Marriott guests had contact with potentially-symptomatic staff? Are those guests being notified or asked to isolate? If the DPH has reassuring answers to these questions, they should tell us.

But it seems more likely that Massachusetts officials, like officials from the CDC to Iran, just really want to tell people everything is fine—and so they’re underreacting in order to convince others, and perhaps themselves, of that. That’s how outbreaks have been handled elsewhere, and if the Mass DPH is handling this one differently, the burden is on them to prove it.

If there isn’t any hidden reason to be reassured, then Boston is out of the containment phase of the epidemic and into the mitigation phase. Fortunately, we can glimpse the future by looking at other countries whose outbreaks are ahead of ours. For a worst case, there’s Italy, which 16 days ago had fewer known cases than MA. Now, Lombardy’s medical system is over capacity, 16 million people are quarantined, and 350 have died—more than half in the last day (source).

To prevent that from happening here, we need to be taking as many measures as possible to flatten the epidemic curve:

And our current plan of holding a million-person parade next Sunday, is, uh, literally the exact opposite of that.

So far, health officials haven’t seemed very good at extrapolating exponential trends more than a couple days into the future. It’s understandable—that requires imagining something that you’ve never experienced before, like running out of hospital beds or ventilators. Fortunately, in this case we don’t have to extrapolate; we can learn from the past, because someone tried the exact strategy of having a parade during an uncontained epidemic before.

It was Philadelphia in 1918, and here’s what the death rate looked like, with a less insane city for comparison (source):

Yup, that’s the death rate immediately going up by (eyeballing) around 5x in one week. In Philadelphia this immediately overwhelmed the healthcare system (source); COVID-19 incubates more slowly, so we should expect a more gradual ramp-up, but they’re about equally infectious overall (both with an R0 of around 2) suggesting a similar overall effect size.

In fact, Boston itself also threw a large military rally earlier in 1918 which likely played helped the disease spread from its initial, military, foothold into the civilian population(source)—civilians started dying a few days after it (image source):

It would be tragically dumb for the same city to ignore the lessons from 1918 and allow a million-person parade to accelerate the epidemic. If you agree, I’d suggest calling your local politicians and telling them that yesterday is the time to start aggressive mitigation measures.

(Addendum: don’t take this post as evidence that you should panic personally—risk to any individual still seems fairly low even in bad cases. Do be angry at the incredibly anemic state response; don’t go full-on prepper.)

Massachusetts should shut down immediately

We’ve been running 30x fewer tests than other states, and have been extremely tardy in responding to the Biogen outbreak.